Success and Tribulation: The Airports of Ecuador 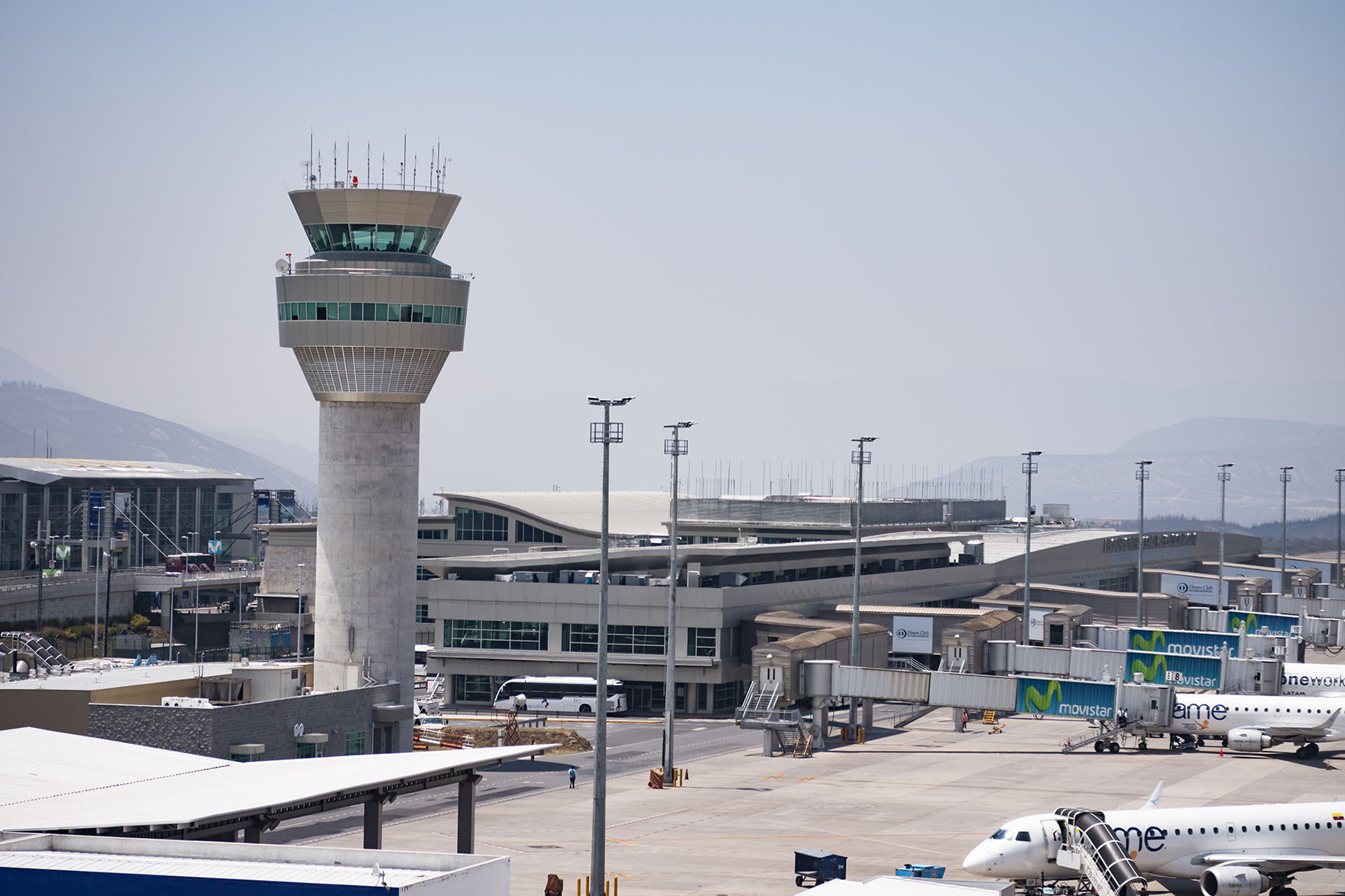 Ecuador is located in northwest South America, sharing borders with Colombia to the North, Peru on the East whilst sitting on the Pacific Ocean to the West. The country is also home to the Galapagos Islands which are situated around 1,000km west of the mainland. The country boasts the eighth largest economy in Latin America with its main outputs being oil, bananas, shrimp and gold.

In terms of its airport resources, Ecuador is well equipped with over 30 airports and airstrips, some practical with others hailed as best on the continent. The country is also home to the world’s first green airport, found on the Galapagos islands. Here is a look at the most notable aviation facilities of the country.

The main airport serving Ecuador and one of the most popular airports in South America, Mariscal Sucre International Airport was opened in February 2013 to replace its predecessor that shared the same name. It is located in the region of Tababela, around 18km east of the Ecuador capital – Quito, and is named after the independence leader Antonio Jose de Sucre.

The old airport was replaced because it had been constructed in an inconvenient, urban location with strong wind currents that resulted in various accidents, particularly in its later years of operation. Furthermore, given its less than ideal circumstances, the government was unable to expand the airport and facilitate increasing traffic.

Construction of the new Mariscal Sucre International airport began in 2006 and it received its first commercial flight in 2012, when an American Airlines Boeing 757 landed on the 4,100m runway with roughly 100 passengers on board. The airport soon received its first cargo airplane in the fall of the same year. Having undergone all necessary testing and certification procedures successfully, the airport was inaugurated in February 2013 and received all operations of the old airport.

Since it began operations, Mariscal Sucre received various accolades such as being dubbed the Leading South American Airport in the 2014 World Travel Awards along with winning second place in the P3 awards. In addition, the airport received numerous upgrades such as modern runway lights in 2014 and the opening of the terminal’s second phase in 2015.

The site covers 15km2, 10 times larger than the old premises, and was opened with a capacity of five million passengers annually, a figure that is set to increase to seven and a half million by 2030.

While the airport is Ecuador’s largest in terms of space, it is the second busiest in terms of passenger traffic after Mariscal Sucre. Terminal Aeroportuario de Guayaquil (TAGSA), established in 2004, is the corporation that has managed the airport over the last 50 years. Its shareholders include Argentina’s Corporación America (51%), Dellair Services (40%), and Ormond Group (9%). Corporación América is the main operator of the airport.

To date passenger traffic at the current airport building is divided into two sections for international and domestic travelers respectively. Plans to upgrade the international side are set for the near future.

The airport has a single 2,790m asphalt runway and regularly sees traffic from the likes of Copa Airlines, American, KLM, Avianca, Turkish Airlines and Air Europa.

Serving the high altitude (2,532m above sea level) city of Cuenca, in the Azuay province, this airport features 1,900m asphalt runway and is the main air portal for the mountainous region. Historically the airport was first constructed in 1940 by the American company Panagra, which had been undertaking various construction projects in Latin America. It is named after Mariscal Lamar, a notable Peruvian military commander and politician that was native to the region.

Managed by Cuenca Airport Corporation (CORPAC), the airport gives travelers direct flights to  Quito and thus connections with the rest of the world.

Since it had been constructed on farmland, with urban development over the years coupled with the challenging terrain, authorities have been faced with the dilemma of expanding the current airport or constructing a new one.

“Because of the geography, there are few suitable places to build a new facility near Cuenca. You have to deal with elevation, topography as well as weather issues such as fog. Finding an area with a three or four kilometer stretch of flat land is a real challenge in any mountainous location.” says Rafael Emerson, a Latin American airport consultant.

Whilst the mayors of Nabón and Oña recommended the valley between their respective towns as an ideal location for a new Cuenca airport, the problem is that at 72km from the city center, the location is too far and would necessitate a one hour and twenty-minute drive.

Cristian Zamora, a prominent member of the CORPAC board has expressed his support to construct the new airport at the distant location, “It’s been 40 years since we decided we need a new location, or at least to make a big expansion of the current one,” he expressed, “we can’t put it off any longer.”

Expanding the runway at Mariscal Lamar airport is an option however given the dense urban environment, the project would necessitate the demolition of 100 homes and the closure of several streets to add between 600m-700m of runway length. Given the unideal circumstances, both Zamora and Emerson agree that this would be the most cost-effective solution with the latter adding, “the population of the Cuenca metropolitan area will be over a million within 20 or 25 years and the demand for air travel will grow dramatically. Long-term, there will be a major increase in tourism, not to mention the growth of the foreign resident population. There will also be a demand for regional international flights in and out of the city.”

Unfortunately, regional leaders have been discussing this pressing matter since 1978 with little being done to address the situation but, as the population grows along with touristic demands the government will soon be tasked with choosing between expanding the current airport or constructing the new one even if it’s a long drive away.

Known also as Galapagos Ecological Airport, Seymour Airport has been hailed as the world’s first green airport. It is situated on the island of Baltra, part of the Galapagos Archipelago off the coast of Ecuador.

It opened in December of 2012 and is one of two airports that serve the Galapagos Islands. It is operated by ECOGAL, a sister company of Corporación América. Known to handle approximately 300,000 flyers per year, the airport is frequented by such airlines as Avianca Ecuador, LAN Ecuador, TAME and Aerogal going between Baltra and Quito. It features a single 2,401m runway that is only operational during daytime hours.

In 2008 the Ecuadorian Government decided to improve the existing airport, which had been used by American forces during the second world war. Corporación América was selected to manage the development of the project, estimated to cost $35 million.

The new airport’s design and construction were created with thorough consideration of minimising damage to the fragile Galapagos ecosystem, following the regulations of the US Green Building Council (USGBC).

The new terminal was built in three phases and integrated recycled steel tubes obtained from oil drilling activities in the Amazon. Seymour Airport’s single terminal spans an area of 6,000m2 and its construction alone cost over $24 million.

The reason that it has been dubbed the world’s first green airport stems from several attributes. For starters, it generated most of its power from renewable sources such as solar and wind. Furthermore during construction around 75% of materials from the old terminal were reused for the new building.

In addition, a bioclimatic design was implemented to minimize the use of air conditioning on the site, saving energy whilst keeping a pleasant temperature throughout the airport. In addition, the airport integrates a sophisticated ventilation plan along with optimized use of natural light to avoid energy expenditure.

From the urban giants such as Mariscal Sucre and José Joaquín de Olmedo International airports to the smaller facilities that serve the Galapagos islands along with the mountainous regions in the country; Ecuador has evolved one of the most impressive airport infrastructures in Latin America. It fares well on its continent alongside its emerging counterparts worldwide, comparable to such countries as Malaysia. It is certainly the case that with powerful airport resources, emerging economies such as Ecuador boost their corporate and touristic capabilities that pave the way for significant economic growth.