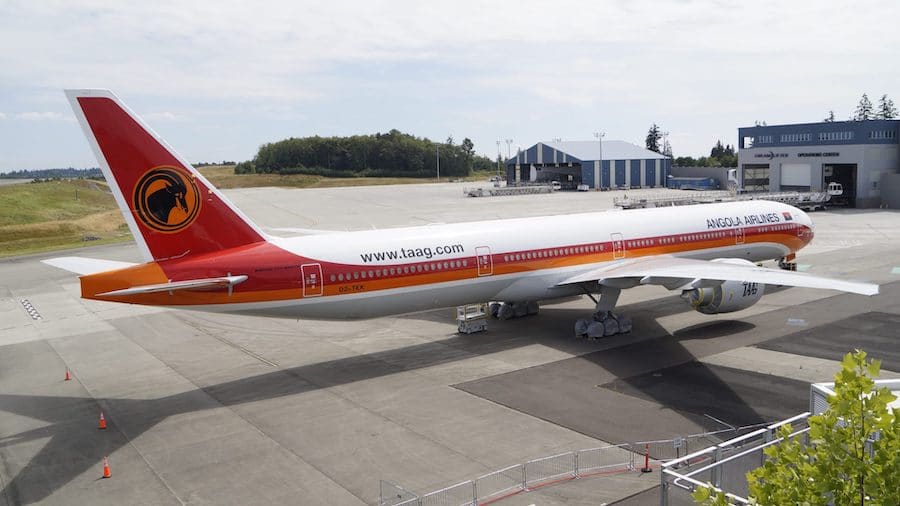 The seventh-largest country in Africa speaks almost exclusively Portuguese, and thanks to its deep colonial routes, has always been on the aviation world stage. Angola has a diverse airline landscape, with a range of airlines filling several different niches, from regional operations to linking the Portuguese-speaking world with direct flights to Brazil. What are the key airlines of Angola? Let's explore.

The flag carrier of the country, TAAG Angola, was initially founded back in 1937, but wouldn't take on the mantle of TAAG Angola until 1973. It's had a long history of adversity, including a ban of some of its older fleet into European airspace until 2019. Fortunately, the team behind the airline worked hard to overcome the odds, upgrading the fleet with modern aircraft and TAAG Angola is now considered a first-class airline - a notable achievement.

According to the Airline Fleets database, the carrier currently has 16 aircraft in 2021:

These aircraft perform domestic operations throughout the country and region, with the Boeing 777s flying internationally to South America (especially Brazil, one of the few airlines in Africa to do so), and to Europe. The airline has flirted with the idea to fly to North America (replacing the charter Sonair Houston route) but it currently lacks the US Federal Aviation Administration (FAA) Category 1 IASA status (which to get would require the country to overhaul its aircraft security and maintenance).  Its Dash 8 aircraft are used throughout the regional centers, and internationally to Harare (Zimbabwe), Lusaka (Zambia), Windhoek (Namibia), Brazzaville (Republic of Congo), and Kinshasa N'Djili (Democratic Republic of Congo). In 2019, the carrier was also considering some smaller jet aircraft like the Airbus A220 and Embraer E2.

The airline will also move to Luanda's new Angola International Airport around 2023-2024, which combined with a new modern fleet, will make this carrier have one of the best comeback stories in the industry.

Sonair was an airline operating in Angola, focusing on domestic operations and charter flights for the oil and gas industry. Until 2018, it also provided international flights to Houston via a wet-leased Atlas Air 747. Changes to the price of oil have resulted in these operations becoming unprofitable.

"Sonangol loses USD2.5 million dollars a month, and Sonair's money has to stop disappearing," said Sonangol Group Chairman Carlos Saturnino "Its planes are old, we owe Atlas Air debt, and our [Houston Express - Luanda-Houston International has] occupancy levels of between 30 and 37%. There are more competitive routes. There are many alternatives to go to the USA today, so the decision was taken to end with the Houston Express [effective March 29 2018]."

It had two divisions, separated into a fixed-wing fleet and a rotor-wings. Its fixed-wing fleet comprises of two B737-700s, five DHC-6-300s, and thirteen Beech 1900Ds, which it uses to fly between the Angolan capital and Cabinda, Catumbela, Soyo, and Lubango. However, the airline was grounded after the parent company, state-owned petroleum parent company Sonangol Group, moved into a restructuring phase late 2019.

"In accordance with the ongoing restructuring program in Sonangol, and therefore in Sonair, the company is announcing that domestic flights to Catumbela, Lubango, Cabinda, and Soyo will be closed from November 30" the carrier said in a statement to Ch-Aviation.

The company is being set up for privatization in 2021, and as such, the airline will be sold as its own fixed-wing asset. As the airline game only made up a small share of the revenue for the oil giant, the main commercial passenger operations have been shifted to be incorporated in the flag carrier TAAG Angola. Approx 130 staff and the two Boeing 737-700s have moved over, with the remaining fixed-wing aircraft going to be used for charter operations.

As TAAG Angola will also be privatized, it seems like that the government is trying to get the best bang for its buck, and moving the most expensive assets of Sonair to the airline to get the best deal.

Rounding off this list is Fly Angola. This carrier operates as the low-cost alternative to TAAG Angola to offer transportation to the lower income demographic of the country. At its launch, it chartered an Embraer E145 to run flights between Luanda, Luena, Dundo, Saurimo, Lubango, and Catumbela, as a virtual carrier - not with its own fleet. While it had to suspend operations in March 2020 due to the Coronavirus and the global lockdown, the airline resumed operations late last year to great success.

This has led to future growth plans such as acquiring two new aircraft, a second E145 and an E120, and basing a new hub away from Luanda.

“The biggest challenge is access to financing [for aircraft] at reasonable costs in Angola rather than demand,” continued GM Muangala in the same interview “During the state-of-emergency, Luanda province was isolated, but all mobility between the other 17 provinces was unrestricted. Buses and minivans continued their commercial services. Is this not an obvious opportunity for a hub outside of Luanda?”

There are several other airlines operating in the country apart from these three main operations, each finding a gap in the market to fill.

Angola is setting itself up for success, with a new international airport and attractive landscape for new airline ventures, the sky really is the limit for aviation in this African nation. For any aviation fans, investors or airlines looking for opportunity, Angola has become a nation to watch.