RwandAir: The Singapore Airlines Of Africa 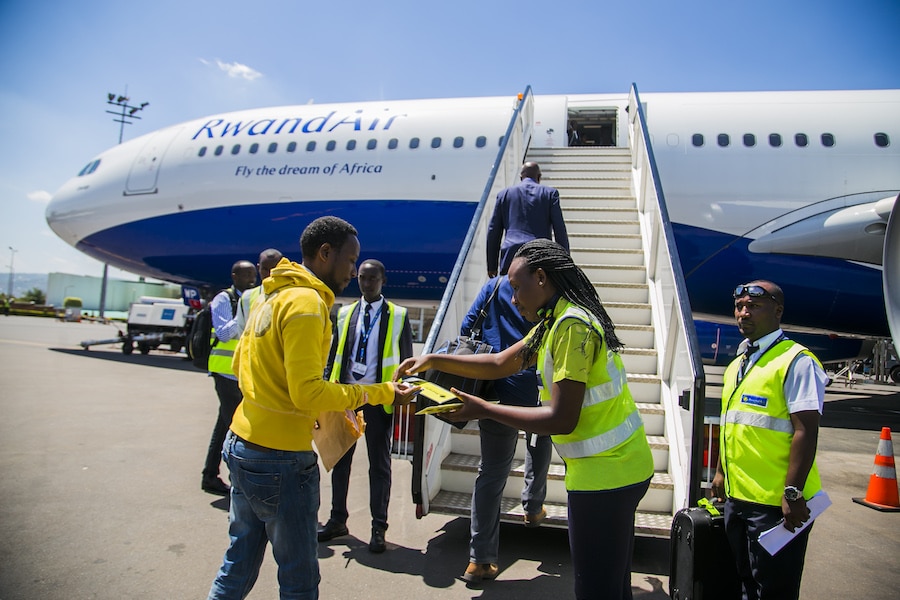 Rwanda is a smaller nation-state compared to its neighbors to the north, east, and west. Unlike Kenya, Uganda, and Tanzania, Rwanda doesn’t have a large domestic market nor a thriving commercial airline market – it only has one government flag carrier airline called RwandAir.

This airline is the key to Rwanda's plan to become a powerhouse economy centered around the Singapore model. Like its goal in Asia, Rwanda is a smaller state surrounded by bigger regional markets. If it can make its home airline the defacto international flag carrier for the region, then it will be able to cement its pivotal role well into the future.

The Solo Airline of the Country

RwandAir is actually the spiritual successor of the countries previous carrier Air Rwanda. The former operation ceased during the civil strife in 1994, and while attempts were made at offering services in the intermediate years with Uganda-based SA Alliance Air, it wasn’t until 2002 that flag-owned operations were reborn.

Humbly beginning its tenure as ‘Rwanda Express’, the carrier slowly expanded with a small fleet of leased regional jets (such as CRJs), before rebranding to RwandAir to better represent the mantle of the nation's flag carrier. In 2011, the carrier took on its first first-hand aircraft, a fleet of Boeing 737-800s. Other notable achievements in these early years also include becoming an Africa-wide international carrier to Accra, Cape Town, Harare, and Zanzibar in 2013, and becoming an IATA member in 2015. Today, the airline flies internationally to Dubai, London, Brussels, Mumbai, and Guangzhou.

The airlines fleet consists of:

The carrier did have an order for Two Airbus A330-900neo (next generation of the A330 series) and two Boeing 737 MAX aircraft in 2019, however they were canceled in 2020 due to the downturn in air travel.

“We can confirm that, as reported, RwandAir’s decision to no longer move forward with its order of two Airbus A330neos and two Boeing 737 Max aircraft is correct", Chief Executive Officer Yvonne Makolo confirmed to ch-aviation

This investment coincided with Qatar Airways’ investment in the new Bugesera International Airport. As seen in other markets, Qatar likes to heavily invest in vertical integration  – owning both the airport and its flag airline. With this investment, Rwandair will be able to springboard into more long-range aircraft and operate significantly longer-range routes – perhaps even to North America from Accra in Ghana.

"RwandAir has already secured authorization from the Government of the Republic of Ghana to use Kotoka International Airport as the Last Point of Departure (LPD) into the United States of America. At Accra, the airline will exercise fifth (5th) freedom traffic rights as provided for in the bilateral air service agreements of both US and Ghana with Rwanda."

the airline said to Ch-Aviation.

While Rwandair has existing pre-approval to fly operations to the United States, it is not with their own aircraft and crews (the carrier is allowed to wet-lease and charter North American operators). With support from Qatar Airways, Rwanda hopes to achieve the coveted International Aviation Safety Assessment (IASA) Category 1 rating – allowing flights from Rwanda to New York via Ghana.

Turbulence in the New Decade

It hasn’t been a completely smooth ride, however, with the airline suffering like many others due to the global Coronavirus crisis. The Rwanda government has offered the carrier a stimulus boost of RWF145.1 billion Rwandan Francs (USD153 million) to help it through the Coronavirus crisis. These funds will help the carrier keep crew employed (although with significant pay cuts expected) and allow the airline to keep its ambitious network expansion goals.

To help compensate for the loss of passenger revenue, the carrier entered the cargo space. Operating flights from Asia to the Middle East, then onwards to Europe via Rwanda, it was able to prove that it was up to the role most often identified with large international premium carriers.

Proof enough for Rwandair to evolve its operation into passenger service.

"We have been operating cargo and repatriation flights from London Heathrow during the pandemic, and we are now delighted to operate scheduled passenger flights for the first time into and out of one of Europe’s premier airports. The move will significantly benefit customers flying into Heathrow from other UK cities who then wish to fly on seamlessly to Rwanda and other parts of Africa. It has never been easier to reach Kigali or cities such as Nairobi Jomo Kenyatta, Entebbe/Kampala, Lusaka, and Harare Int'l for passengers traveling from London"

Rwandair has something that many other airlines in the region don't have - a broad vision of the future. While its competitors squabble for regional routes, Rwandair is concentrating on vast international operations across the world, becoming a house-hold name in big cities like New York, London and more. There is no telling how high Rwandair can go.