From Mountain to Sky: The Airlines of Nepal 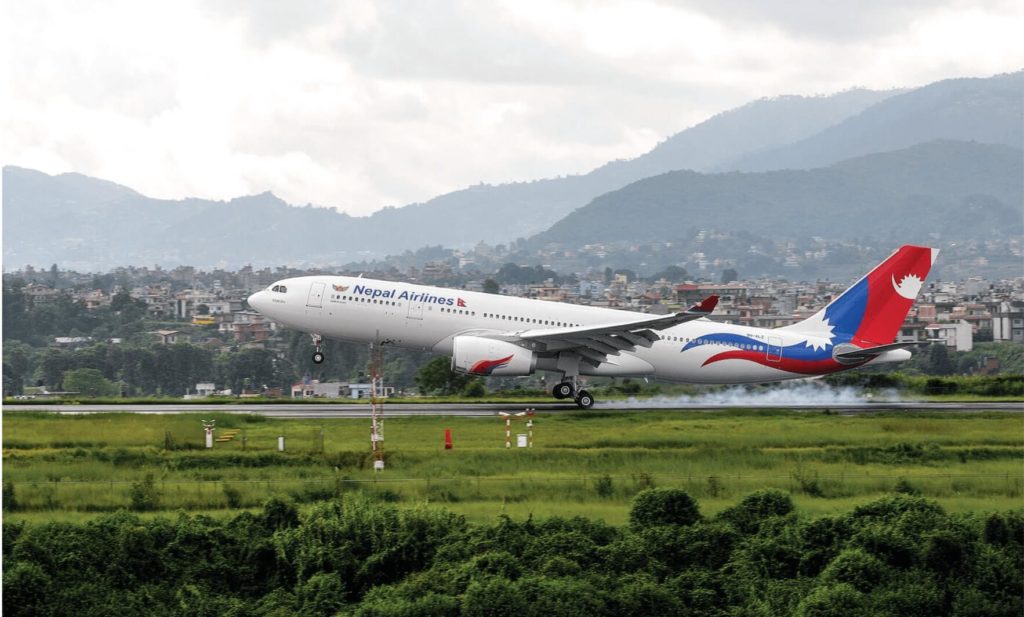 Home to the world's tallest mountains, from Everest to Annapurna along with endless green fields teeming with flamboyant wildlife, it’s no surprise that tourism is one of Nepal’s primary sources of income. While the country is certainly a sight to behold, it is by no means easy to navigate. In fact, because of its harsh terrain, Nepal does not have sufficient railroad or road networks to facilitate land travel. To add to the challenge, Nepal sees regular monsoon episodes that make already remote locations even harder to access. Eways Aviation presents a closer look at the aviation marketplace of Nepal which serves the budding tourism economy.

The Civil Aviation Authority of Nepal (CAAN) regulates the country’s air space facilitating the operation of Nepal’s 14 passenger airlines and numerous charters. In total there are 3 local airlines that undertake regular international travel whilst the rest operate solely within the Nepalese borders. Here is a closer at some of the country’s notable airlines.

Established in 1958, the Royal Nepalese Airlines Corporation was Nepal’s first airline to use a single Douglas DC-3 for its operations within the region. The airline's routes included scenic voyages over the vast Nepalese terrain and passenger flights to destinations such as Calcutta and Delhi in India.

Based in the Tribhuvan International Airport in Kathmandu, the company adopted the name Nepal Airlines Corporation in 2007 and continues to play a key role in the Nepalese aviation sector. Its fleet consists of 5 planes including 2 A320-200s, one A330-200 and DHC-6-300.

Unfortunately, the EU ban on Nepal Airlines since 2013 continues today with no prospects of its reversal anytime soon. That said, along with its 15 domestic destinations Nepal Airlines adds a total of 9 international destinations to its roster namely, Delhi, Bangkok, Kuala Lumpur, Hong Kong Bengaluru, Doha, Dubai, Narita and Mumbai.

Given its relatively poor performance and its heavy debt, the Nepalese government is seeking to privatize the airline as part of its profitability strategy. While presently no investors have shown interest, the government launched a thorough audit of the airline in March 2021 in preparation for the sale of company shares.

Founded in 1997, Buddha Air was one of the emergent airlines that joined the aviation market after the Nepalese airspace was opened to private airline companies. Its first voyage used a Beech craft 1900 D carrying 16 passengers for an hour-long flight from Kathmandu to Mount Everest and back.

Today the airline continues its “Everest Experience” flights whilst also serving local destinations including Tulmingtar, Bhadrapur, Janakpur and other destinations in Nepal. Whilst predominantly a domestic flier, Buddha Air does have international airline status due to the fact that it makes a regular voyage to Varanasi in India. Otherwise, Buddha Air serves 15 domestic locations making an average of 100 daily flights.

Established in 2014 through a Nepalese-Chinese joint venture, Himalaya Airlines is the combined effort between the Yeti World Investment group and Tibet Airlines. The Nepalese continue to hold the majority of shares in the company with an ownership of 51%, whilst the rest belonging to the Chinese. The airline made its first flight in October of 2016 flying first to Doha and seeing its second journey to Colombo.

Now the airline has expanded to cover 10 International destinations such as Abu Dhabi, Beijing, Dammam, Dhaka and Kuala Lumpur. Himalaya Airlines, is the only participant in the Nepalese aviation marketplace that performs international flights exclusively. Furthermore, the company takes credit for being the only Nepalese airline to fly to the Kingdom of Saudi Arabia. It has a fleet of 3 planes namely 2 A320-200s and a A319-100.

In early 2021, Himalaya Airlines sowed the seeds of a business partnership with the domestic Nepalese flier Yeti Airlines. The agreement sees airlines with access to each other’s resources and services thus expanding their span of operations and increasing their revenues.

“Yeti Airlines is pleased and excited to have Himalaya Airlines as a partner which has certainly given a positive message to the business communities. With this partnership passengers of both the airlines get the added benefits. We are glad to have this opportunity to work together with Himalaya Airlines for widening the network”

according to Anoj Rimal, CEO from Yeti Airlines.

The result will see Himalaya Airlines profiting from domestic flights while Yeti Airlines will gain international operations through its new partner.

One of Nepal’s most prominent domestic carriers Yeti Airlines began its operations based in Kathmandu during the fall of 1999 using a lone DHC6-300 Twin Otter airplane. Today the airline maintains six aircraft in total with a fleet comprised of 5 ATR72-500 and 1 BAe Jetstream 41. With United Nations assistance, the airline underwent an extensive carbon audit procedure in 2019 and through various ecological implementations arrived to drastically reduce its CO2 emissions at a rate of 20% per flight km and its individual passenger footprint by 12%. As a result, Yeti Airlines is the first carbon-neutral airline in Nepal and South Asia.

This came as a blessing to the country’s ecology since the airline is the most active within Nepalese borders serving 12 destinations and performing sight-seeing flights of Mount Everest and Annapurna.

As the airline continued to expand with more planes and routes, a sister company Tara Air was founded in 2009 to handle short take-off and landing (STOL) aircraft namely five DHC 6-300 Twin Otter and two DO 228 Dornier plane that are especially effective in the mountainous regions of Nepal.

A relatively small Nepalese Airline, Saurya Airlines is based in Tribhuvan International Airport in Kathmandu and performs all of its flights with two CRJ200ERs. It started its life in 2014 and saw a turbulent start when extended bureaucratic procedures kept the plane grounded for three months.

Although the airline had full intention to operate as a passenger carrier, it was reclassified as a charter by the CAAN for not maintaining the minimum number of two aircraft necessary to be considered a scheduled passenger carrier. Fortunately, the reclassification was reversed when the airline bought its second plane in 2017 and returned to its activities as a carrier.

Between Kathmandu, Biratnagar Nepalgunj today Saurya Airlines flies to a total of 5 domestic destinations around Nepal.

One of the largest private charters in Nepal, Air Dynasty operates since 1993 and uses 4 Eurocopter helicopters - AS350 B3e, two FXIIs and a BAwas. In its roster of services, Air Dynasty provides services such as scenic flights, cargo transport, transport alternatives as well as medical evacuations.

Beyond the Mountain’s Summit

While Nepal’s aviation landscape is not without fruit, such a naturally diverse country should strive to overcome the effective EU travel ban and tap the potentials of the European marketplace, a challenge known to several countries in the region. Furthermore, there is plenty of opportunities for airlines to increase their international destinations and further improve Nepal’s accessibility to the world. At Eways Aviation, we hope to see the standard of Nepal’s aviation landscape fly higher than its countless mountains.