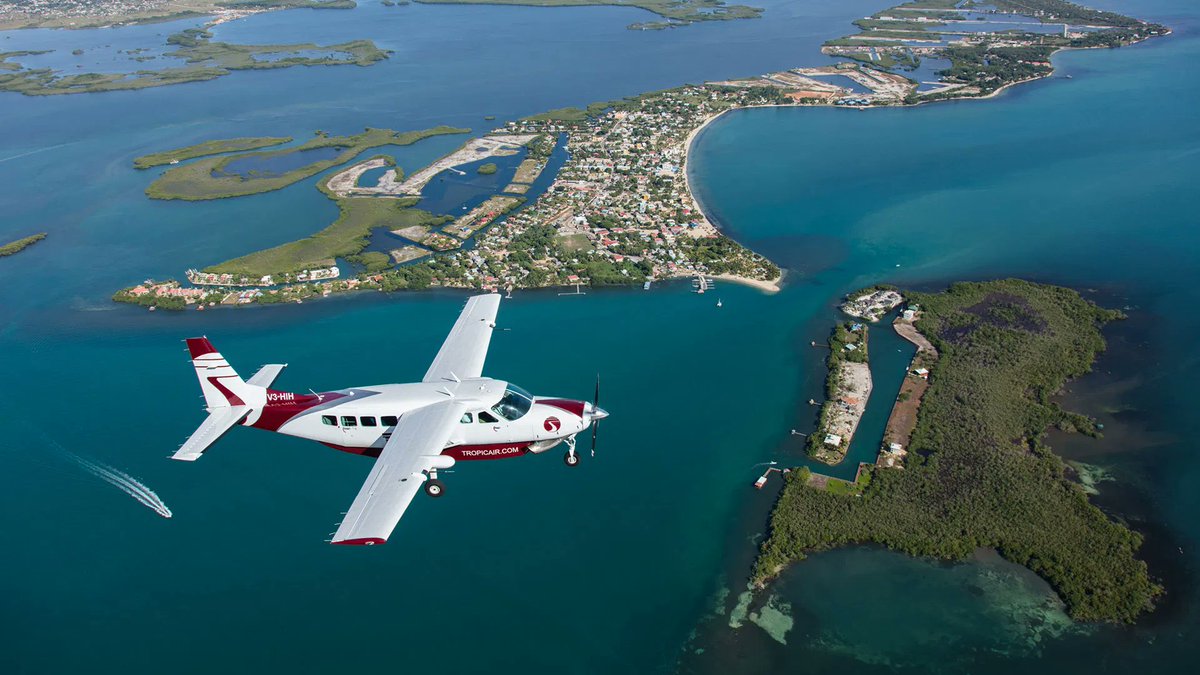 Found on the northeastern coast of Central America, Belize sits on the Caribbean Sea sharing borders with Mexico and Guatemala. Whilst its economy is fuelled primarily by agricultural exports, Belize is also growing as a tourist destination.

On the aviation front, the country counts a myriad of 22 airports that link the mainland with the numerous islands off the coast that are served by two local airlines. All of the country’s airspace is regulated by the Belize Department of Civil Aviation.

Also known simply as Belize Airport, Philip S.W. Goldson International was built in 1943 and saw the addition of its first terminal building one year later;  located in the town of Ladyville, roughly 15km from the capital of Belize City. It serves as the main air portal and operates all international traffic in and out of the country along with handling several domestic departures. The airport has a single 2,950m asphalt runway that is capable of receiving long-haul aircraft.

Owned by the government along with the Belize Airport Authority whilst being operated by the Belize Airport Concession Company. It counts two passenger terminals that together have a total area of 10,219m2 along with a single 11,148m2 cargo terminal. In 2020, amidst the pandemic the airport saw traffic of 310,000 passengers, a sharp drop compared to the one million flyers it had received in 2018.

In December 2017, the airport received a $9.9 million expansion project that increased terminal capacity improved whilst improving the airport’s infrastructure. Unfortunately, further expansions set for completion in 2020 were hindered by the coronavirus pandemic and remain on hiatus.

In terms of destinations, the airport has direct links to several American destinations such as Chicago, Houston, and Los Angeles along with flights to Guatemala and Panama. Airlines that are regularly seen at Philip S.W. Goldson International include United, American, WestJet and Copa along with the two main airlines of Belize – Tropic Air and Maya Island Air.

Unfortunately, both the airport along with the capital are prone to significant flooding due to their minimal elevation of 5m and coastal proximity.

At only 1.6km from the capital, Sir Barry Bowen Municipal Airport provides predominantly domestic services, connecting travelers to the numerous cayes (islands) off the coast of Belize. It is essential to the transport infrastructure of Belize for allowing easy travel between the mainland to islands without necessitating boats or water taxis. It has a single 940m asphalt runway, meaning that is more suited to accommodating light aircraft.

The two local airlines of Belize are the sole flyers to this airport, with Maya Island Air having their head office on the premises. Together they provide flights to such destinations as Caye Caulker, Caye Chapel, Placencia, Punta Gorda and San Pedro.

In 2016 the airport completed an expansion project that cost a total of $8.5 million adding improvements such as new roads, a taxiway along with a modern runway lighting system and a larger car park. Furthermore, the runway was extended to its current length with the addition of a parallel taxiway.

This airport serves the city of San Pedro along with giving access to Ambergris Caye. It has a single 1,067m runway and is accessed by the two local airlines of Belize.

It was built by John Greif, the founder of Tropic Air, in the mid-1960s. First operating as a runway strip with his single Cessna airplane, the airport was established to give tourists easier access to the attractive beaches of San Pedro. With its single terminal, the airport operates between 6 AM and 6 PM due to less than ideal lighting capabilities. As a small practical airport, it continues to serve the same function of giving locals & tourists access to the off-shore island today.

It is worth noting that several airports on the islands of Belize, such as Caye Caulker and Caye Chapel are similar in nature and serve the same purpose as John Greif Airport II. Together they form an aviation network that provides efficient transport in the marine environment.

Established in 1979 by John Greif III, Tropic Air began with a single aircraft and two employees. With its base in San Pedro, over the years Tropic Air has grown to be an important transport provider in Belize; with IATA certification, the airline provides domestic services on the mainland and islands of the country.

Aside from providing passenger services, the airline is also an active cargo transporter, operating in the same fashion as charter airlines. Tropic Air daily transports items from mail and packages to larger supplies.

It operates a fleet of 15 Cessna 208B Grand Caravan aircraft along with two Cessna T182T’s – each with a capacity of between three to fourteen passengers. The airline is also looking to increase its fleet of Caravans in the near future.

Destinations covered by the airline in Belize include John Greif II airport, Sir Bowen Municipal and Philip S.W. Goldson International. Tropic also extends its operations to other countries in the region such as Guatemala and Honduras.

With its main hub, a Philip S.W. Goldson International, the airline’s main offices are found at Belize City Municipal Airport. The airline provides over 250 daily scheduled flights to nine domestic destinations including the two airports of Belize City, Caye Caulker, Caye Chapel and Placencia among others. Furthermore, the airline offers flights to Guatemala and Honduras along with providing private charter services.

Its fleet of 13 planes consists predominantly of light aircraft such as eight Cessna 208B Caravan, a Cessna 182S and a Gippsland GA-8 Airvan.

Overall Belize has developed an adequate airport infrastructure to accommodate for locals and tourists alike looking to navigate the country. And whilst its two charter-esque airlines provide decent services on the domestic and regional fronts, there is a void in passenger and cargo services in the aviation marketplace.

As Belize grows in popularity as a tourist destination, it could benefit immensely with the addition of a flag-carrier airline along with a private sector that operates jets instead of light aircraft. Only then can it see higher traffic and spread its outreach to international destinations beyond Central America and the Caribbean.