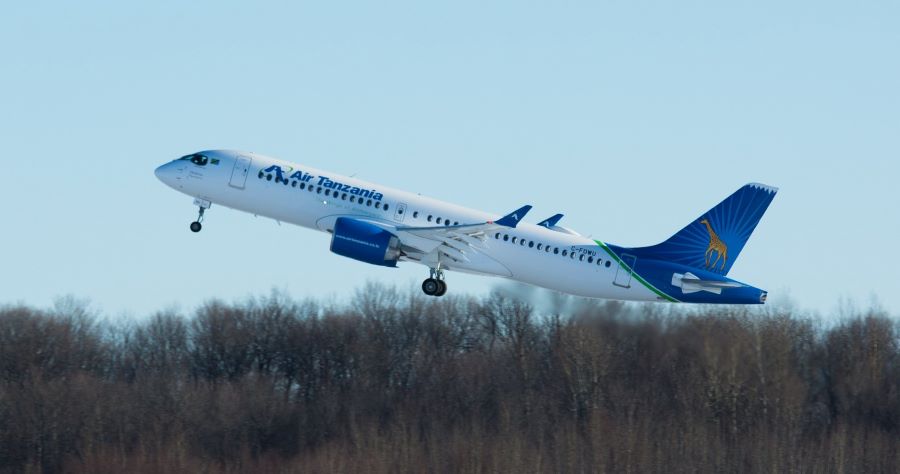 Tanzania is poised to become an aviation powerhouse in Africa thanks to its government investment, flag carrier airlines, and strong domestic market. But is that enough to beat rivals Rwanda and Kenya who want to take the east African aviation crown for themselves? Let's explore.

According to Ch-Aviation, six registered IATA passenger airlines are operating in Tanzania, but many more ICAO operations that fly tourists on scheduled routes between the county's 28 airports, 16 of which are international. But the real meat of the market is the remote safari landing strips, and the beach havens off the coast of Zanzibar. These airstrips are often unpaved, dusty, and hot, requiring specialized aircraft that would not work in other markets in the world.

The first is the state-owned flag carrier Air Tanzania. Before the current world crisis, they had a fantastical regional network across the country and flew to six international destinations.

Its fleet comprises of two Airbus A220s (the first in Africa), two Boeing 787s, and five De Havilland Canada DHC-8 Dash 8 that it deploys for its vast domestic network. The investment in advanced current generation narrowbody and widebody aircraft has allowed it to be considered a serious rival to international carriers like Kenya Airways, Emirates, and South Africa Airways. But this airline is not resting on its paws, but leaping up to conquer the Serengeti with another two Airbus A220s and two additional Boeing 787s.

Plus, the airline wants to expand into the freighter market with its first Boeing 767F. In plans revealed during the 2020-2021 financial year statement, Tanzanian Minister for Works, Transport, and Communications, Isack Kamwelwe, outlined to Ch-Aviation how this freighter would be a great benefit for the airline (and the country for the state-owned carrier):

"This aircraft will help increase the value chain of our products, including flowers, fish and fish products, meat, cashew nuts, fruits, and vegetables"

The airline has already placed a deposit for the plane.

In 2020 during the aviation crisis, the carrier paused much of its capacity to wait out the storm. They have happily reported that 95% of their domestic capacity has returned, and international routes are not far behind. Speaking to media only yesterday when this article was published, the CEO said, "We plan to start flying to India in the second week of this month. The schedule will be out by tomorrow (today)," The two countries have since signed a travel bubble agreement.

Next on our list is Precision Air, a regional airline with a few international routes to Kenya and Uganda. It is the largest privately-owned airline in Tanzania, although Tanzania rival Kenya Airways owns around 41% of the carrier. It has a fleet of nine ATR aircraft but has previously operated a single Boeing 737. Interestingly, the airline also has codeshare agreements with Etihad, Rwanda Air, and Kenya Airways. In fact, in 2018, Kenya Airways wet-leased an entire Precision Air turboprop for one of its major routes.

The airline is innovative with its route planning, realizing that Kilimanjaro can be more useful as a mini-hub, rather than simply a destination and thus reduce costs. Precision Air operates six outbound routes from Kilimanjaro.

“Precision Air's prospective customers may now afford the luxury of time and time management at their disposal, whether they are heading to a business meeting or are just in time to catch a family event”

Like Air Tanzania above, Precision Air saw a major downturn during the Coronavirus crisis. Since then, it has returned to around 40% of its pre-crisis level.

There is one other major airline in Tanzania that operates scheduled services and is worth mentioning, Coastal Aviation. Flying across Tanzania, Kenya, and Rwanda's Kigali International Airport, the airline has made good use of its 24 turboprop aircraft to carve out a variable niche in the region - flying wealthy tourists between major airports hubs, remote safari sites, and then onwards to the warm island beaches.

However, this could all change with the introduction of larger turbo-prop aircraft outside the 'light aircraft' category. The airline has a major peak of tourism traffic during the northern summer periods, and finds itself wet-leasing bigger aircraft. Any bigger aircraft would be unnecessary outside of this time - unless deployed on large scheduled routes like a city to city flight. Thus Coastal Aviation has seen a chance to move into major scheduled operations with the Dash 8-200, Dash 8-400, or the ATR42.

"We will definitely be in this market in five years' time; it's just a question of when. But it all depends on how we can manage seasonality. If we can manage the 39 weeks outside peak season and create enough volume then, then it will work," said Managing Director Shafiul Syed to Ch-Aviation "Taking it to a scheduled basis would need the economics to work, which is a very different story if it is to be sustainable."

When understanding the Tanzanian aviation space, it's best to start with the airlines. Like a heavy downpour during monsoon, many carriers, both big and small, find cracks in the market to fill with revenue-generating services, sometimes with aircraft you least expect. We see this with the vast number of private safari airlines that expand in a certain geographical niche and move into scheduled services.

And as no other market in the world can match the number of regional airports of Tanzania - the landscape provides a challenge for airlines to manage MRO and handle an aircraft on the ground. But this is not a challenge for Eways Aviation; with our team available 24/7 to help airlines and other aviation firms find an MRO and AOG solution, you can be confident that we can get you flying again no matter where you are. Get in touch with us today.