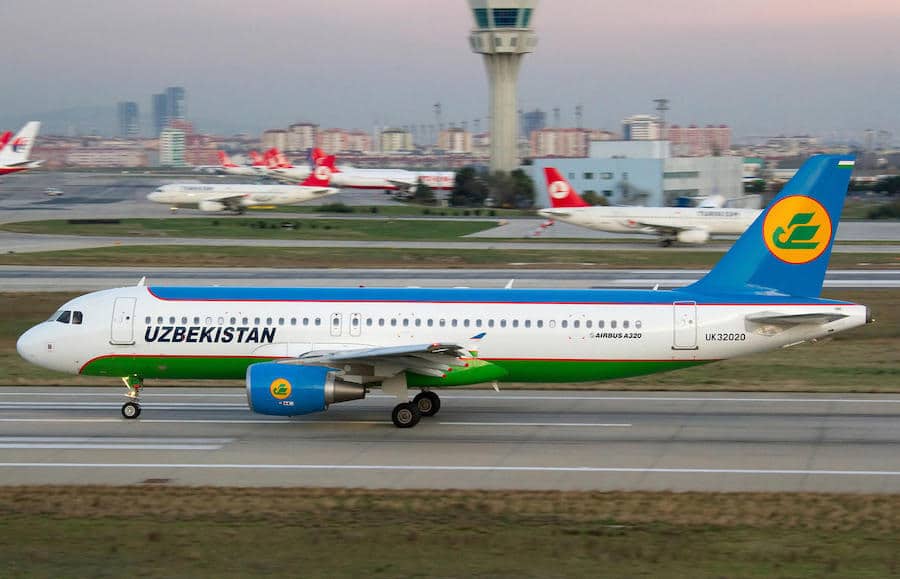 Uzbekistan is a proud country in a region often overlooked by the world of aviation, but it plans to be a force to be reckoned with. However, government regulations have made many ask whether the country can get out of its own way, and become an aviation juggernaut like Singapore or Rwanda? Let's explore the aviation landscape of the country.

While aviation has all the ingredients for success in the country, two main issues are holding back its development, one for airlines and another challengin airports.

Which airlines fly in Uzbekistan?

According to the Ch-Aviation database, there is only a single airline in Uzbekistan with an IATA code - Uzbekistan Airways.

This carrier is a state-run operation that actually has a very modern fleet and an extensive route network. Like many other state operations, it has access to materials and exclusive rights to its domestic operations. It has a fleet of 33 aircraft, 13 of which are parked, ranging from small A320s up to Boeing 787 Dreamliners. As there is only one airline in the country, it is afforded certain luxuries that other countries carriers don't have - special deals at airports, lower fuel prices, and a government said to block other market entrants (both foreign and domestic startups).

In recent news, the government has made efforts to privatize the airline to help open up the country's economy. Speaking to media, the Uzbek government said it might "allow a prestigious foreign company to manage Uzbekistan Airways." However, these efforts might be in vain if the other issues are not solved first (see below).

But if this market is so lucrative, where are all the other airlines?

There are two key startups in the country, Humo Air and SilkJet.

Humo Air is a subsidiary of Uzbekistan Airways and is supposed to be a low-cost carrier to compete with other rivals in the region. However, so far, events in 2020 have sucked the life out of the local industry, and officials have decided that what little trade they have, should go to the mainline carrier. The certificate has been retained, but the airline is only operating very remote regional routes and helicopter connections.

SilkJet is a different story. It is a prospective operation with a $125 million US fund to start the countries first low-cost-carrier. They plan to ply the country's domestic routes between airports with a fleet of Airbus A320neos and provide inexpensive travel to the countries citizens. Plans include a fleet of 41 aircraft, including special long-range A321s (like the XLR) performing long-haul network that connects Europe, the Middle East, and Asia.

However, this venture has failed to materialize thus far, with both the startup and the government blaming each other. The startup has said that meetings with the government have fallen on deaf ears and held up this business's launch.

"The Ministry of Transport says that we have not handed over any documents to them," the airline startup said to Ch-Aviation. "I suppose that they are referring to the delivery of a package of documents (an application) for obtaining an Air Operator's Certificate (AOC). If so, the process is not just about the submission of documents. It includes a list of activities that also involve the hiring of staff for key positions in the airline, the writing of manuals, and much more."

Other factors that hold up the airline's foundation include a lack of a framework for unbundling air travel services. So far, there is no legislation for baggage fees, seat selection, non-refundable tickets, and even the ability to run a flight without serving a meal!

What is the Airport Landscape of Uzbekistan?

The second issue with Uzbekistan is its monopoly airport landscape. The country has 53 airports, 33 of which have paved runways, and six can take large Boeing 747 aircraft.

However, only Tashkent International Airport is running long-haul services to Europe and the Middle East (and is the third biggest airport in Central Asia), with an additional cargo facility operated by Hanjin Group (affiliated with Korean Airlines) for a fifth freedom Incheon-Navoi-Milan route. With its two terminals, the airport can handle up to two million passengers per year, although quickly reaching its limit, the government has delivered plans to relocate the airport by 2030.

Several other airports in the country cater to domestic aviation like Namangan Airport, Urgench International Airport, Fergana International Airport. Thanks to the country's unique shape, these airports receive a large share of domestic traffic despite the planes flying over neighboring countries. However, no airlines in the country (the one-state carrier or start-ups) have attempted to launch a hub from one of these other airports despite the availability to do so.

These airport facilities fall under the same governing body, the Ministry of Transport and Uzbekistan Airports, and have been accused of price-fixing landing fees. Because there is no private investment, airport facilities are at the government's mercy and thus must ensure the monopoly of government services (like Uzbekistan Airways). For there to be any change, airport services charges and ground handling and navigation fees would need to be standardized throughout the country - without Uzbekistan Airlines getting a better deal than others.

What is the Future of Uzbekistani Aviation?

Fortunately, the above is about to change. Following last year's movement to an open-skies agreement with other countries, this June, the government instructed the ministerial department to rewrite the book on air travel and streamline access for new start-up airlines.

Plus, back in February, the government courted four different airlines to open up local domestic subsidiaries and open more fifth freedom routes (routes that allow the airline to go onwards to a second country without basing themselves in Uzbekistan).

The monopoly, which Uzbekistan Airways used to have, will no longer exist. At least five or six air carriers will appear in Uzbekistan in the next two or three years. These are precise forecasts. The volume of passengers carried is planned to be increased by two or even three times," Transport Minister Elyor Ganiev said to Ch-Aviation in June. "Negotiations are underway with four companies. But while this is all at the stage of negotiations, it would be premature to announce anything."

Part of this overhaul also includes airports that have been given the green light to be more welcoming to airlines. The airport authority has been instructed to reduce their aircraft ground handling costs by anywhere between 30 and 50 % and optimize their charges for passengers and freight transportation charges. Although it has yet to be seen if anything changes with SilkJet remarking that the conditions in the Uzbek market for a true low-cost carrier were not in place, neither in terms of tariff policy nor in terms of the volume and quality of the service provided [by Uzbekistan Airports].

Eways Aviation is a local expert in aviation in Central Asia and specializes in helping firms develop market access, AOG and MRO services, and aviation advice. If you want to be involved in the Uzbek market, then get in touch with us today.