The Duopoly Of Brazil's Airport Landscape 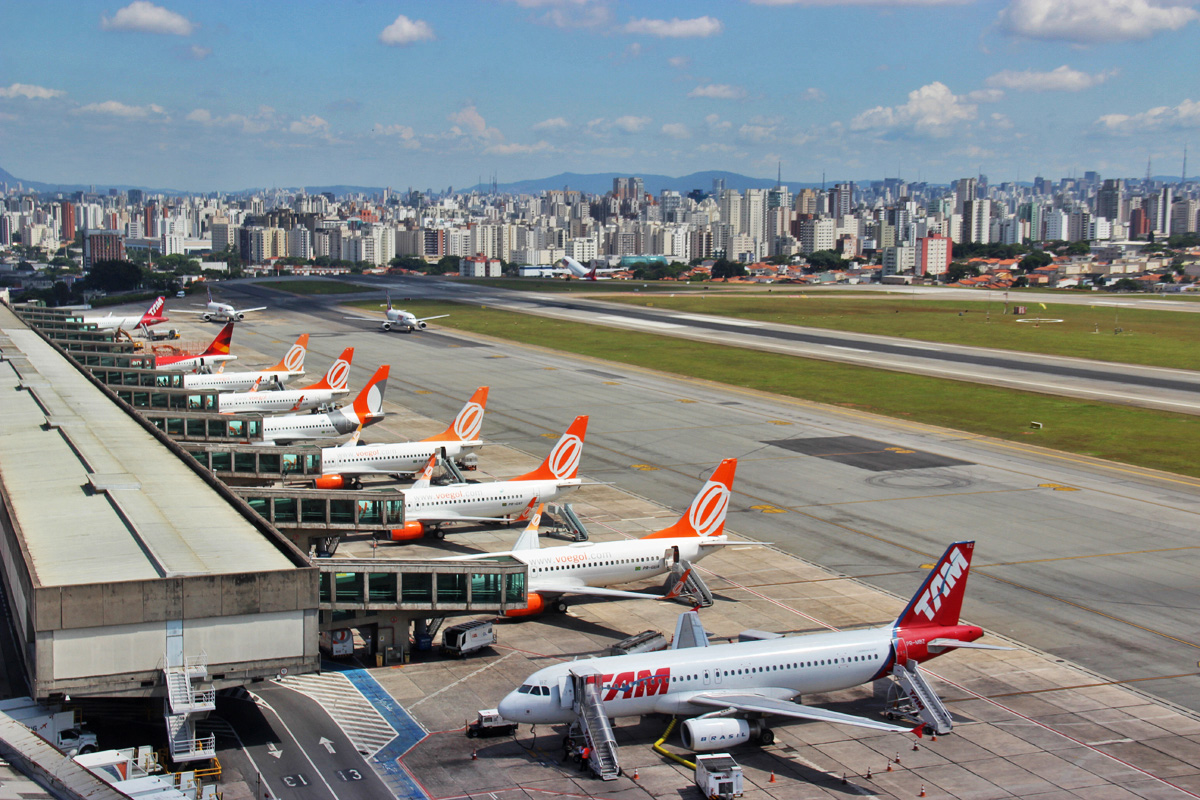 Brazil is a big country. We've already talked here about "The Future of Brazil’s Aviation in a Post-Covid World"  but we should note also that there are a lot of airports of note under the nation's flag. And finding the right one for your airline or aviation firms next move can be daunting.

After all, according to IATA, there are in total 534 public and 2,183 private aerodromes in Brazil alone. So where do we begin? Let's run down the most popular airports in Brazil, and the background on their development.

Where are Brazil's Most Popular Airports?

According to published passenger data for January 2020, the majority of passenger traveling in Brazil, passed through two cities.

It's worth pointing out that the government in Brazil has been on a path of airport privatization to recover the significant investments they have fueled in the local aviation industry. So far the biggest airports have been sold to external investors (some international), and since then the government has slowly been divesting from airports region by region. There are auctions in place at the end of 2020 for up to 22 airports, but this may be delayed due to the current aviation crisis.  As airports are primarily private in this region, it means that market forces will act far more strongly on their operations and conversely, firms looking to work with these companies will have an easier time securing deals.

São Paulo Guarulhos International Airport is by far the busiest airport in Brazil with well over four million passengers per month. It is so busy that it has twice as much traffic as the next airport on the list, Congonhas Airport, which is also located in São Paulo. It is only second in all of Latin America behind Mexico City International Airport.

Built way back on August 11, 1980, the airport was an expansion to two existing military air bases (which still have a presence at the airport today). The airport has two runways, extended and widened in 2015 to support Airbus A380 operations (although currently doesn't have a scheduled service due to the current crisis). There are three airport terminal buildings, with the first two operating domestic flights and the latter operating long-haul international flights.

Since the 2014 World Cup and the 2016 Olympics, the airport has seen less public government investment (there were plans for a train line but this never eventuated), although some private international airlines have invested in the air facility. In particular, American Airlines has invested $100 million into the airport for a new 17,000 m2 (180,000 sq ft) maintenance hangar that can maintain two widebody aircraft side by side, ensuring its aircraft on the route have sufficient support. LATAM Brasil followed suit with its own hanger that cost around R$130 million the same year.

As the second fiddle to the bigger (and grander) Guarulhos International Airport, Congonhas serves as the city's main domestic airport (of three others). It is the second busiest airport in Brazil with 1,912,835 passengers in Jnauary 2020, facilitating four different airlines (Azul Brazilian Airlines, Gol Transportes Aéreos, LATAM Brasil, Voepass Linhas Aéreas). It is owned by the city of São Paulo but its operation is privatized. There is only two runways at the airport which limit its operations to 30 per hour, and they are too short for larger aircraft like the Airbus A380. Plus, because the airport is utterly surrounded by the city of São Paulo, there is no hope of any vast new expansions.

Interestingly, at one point the airport and its airlines operated a once-every-half-an-hour service to Rio's Santos Dumont airport called the 'air-bridge'. Essentially, ticket prices, costs, check-in, and more were all regulated and airlines were guaranteed a fair cut at the end of the year. This ended in 1999 when it no longer became economical to work together.

The government of São Paulo has been pushing for the airport to resume international operations, and provide a competitive rival to the Guarulhos. Whether or not this will go ahead in this changing climate remains to be seen, although if it did likely local South American carriers would choose this airport thanks to its proximity location to São Paulo's downtown.

"I spoke with Tarcísio (Gomes) with Paulo Guedes on Friday, we will internationalize Congonhas". - The governor of São Paulo, João Doria, after a meeting with Brazil's federal government ministers of Economy and Infrastructure.

Physically the largest airport in Brazil (but not the busiest with only 1,261,700 passengers in January 2020), it is the gateway to the tourism capital of the country. It was the flagship destination of the 2014 FIFA world cup and the 2016 Olympic games, with the airport receiving upgrades of around  R$819 million (US$431 million; €302 million), adding up to 26 new gates, a huge private apron for smaller aircraft and a new carpark. The airport is private and operated by  Aeroporto Rio de Janeiro, controlled by Grupo Odebrecht (60%) and Changi Airport Group of Singapore (40%) who paid R$19 billion for the rights until 2039.

The airport is also a cargo hub, with several international cargo carriers operating regular and scheduled cargo services to the airport, and a maintenance hub with European carriers (like TAP Portugal) choosing to base its South American operations here.

The second airport to Galeao International Airport, Santos acts as the cities domestic counterpart, much like Congonhas Airport in São Paulo (in-fact, it was the destination of that famous airbridge service). It is very small for its operations, and located in a hazardous area of the city (near the famous Sugar Loaf mountain), and thus is locked for 19 operations/hour. This makes it a high demand airport thanks to its location, but ticket prices high for passengers.  The main terminal buildings were overhauled back in 2009 for the cities upcoming events, with the private operator spending around R$152.2 million (US$80.2 million; EUR64.5 million).

There have been calls for the airport to be closed and operations moved to one of the many other suitable sites in the area, as access to one of the runways either forces incoming planes over high peaks over the city or around the aforementioned coastal Sugarloaf mountain. With the fall in air traffic over the world, it is quite possible that this plan will gather momentum, and property developers will gain access to the lucrative land.

The capital airport of Brazil, Brasília's Presidente Juscelino Kubitschek International Airport, is the newest on this list and didn't really exist more than 60 years ago (it was just a dusty runway when the planned city was still a concept). However, today it is a political and economical focus point of the Brazilian aviation industry, serving up to 16,727,177 passengers in 2019. As the head of the Brazilian state, many partner countries operate regular services to the country, and wealthy government servants use the airport exclusively to fly to far-flung holiday destinations. It is also the main domestic gateway to reach the other airports in Brazil, especially Rio and São Paulo to the south.

The airport is a little slow in its development, opening up a second airport in only 2005 and a second domestic terminal in 2014. Like other Brazilian airports when Rio won the Olympics and Brazil the FIFA World Cup, it got a slew of new investment (R$514.8 million (US$306.06 million; EUR224.76 million)) to update all of its terminal buildings and acquire additional aircraft parking.

As the airport is the flagship for the Brazilian aviation sphere, it is technologically advanced and the local authority seems willing to spend funds on marvels - such as twin cleaning robots that can keep the terminal spotless, or facial recognition passport controls.

Also known as Belo Horizonte International Airport, it serves Brazil's biggest city Belo Horizonte and was originally the overspill airport for the cities main strip at Carlos Drummond de Andrade Airport. The plan originally was for airlines to slowly move away from the original and to the new Tancredo Neves-Confins in 1985, but thanks to the proximity and popularity of the original, airlines were reluctant. Thus the local airport authority decided that the only plans that could land at Carlos would be 50 seaters or private aircraft, and almost overnight airlines moved to the new facility.

There are two terminals, with the first operating international flights and the later domestic operations. Like many Brazilian airports, it is privatized and a consortium of CCR (75%) and the administrator of Munich and Zurich Airports (25%) controls its operations until 2044.

Today the airport boasts numbers that place it in the top five, with 1,075,145 passengers in January 2020. It has a huge cargo capacity of 18,000 tones (39.682.000 lb) per cycle and is the maintenance hub for national carrier Goa Airlines. The government wants this area to be an aviation hub, and is offering tax incentives for companies that set up operations in this 'industrial airport'.

Brazil has a dynamic range of airports that have recently received government investing, and thanks to plentiful support from the government, aviation has abundant growth opportunities on the horizon. If you are an aviation firm or an airline looking for a local expert in the Brazilian landscape, then let Eways Aviation be your partner. With on-the-ground contacts and insider knowledge, we can help you navigate the complex web of airports and government regulation in this jewel of South America. Contact us today.