How Are Aircraft Stored During The Aviation Crisis? 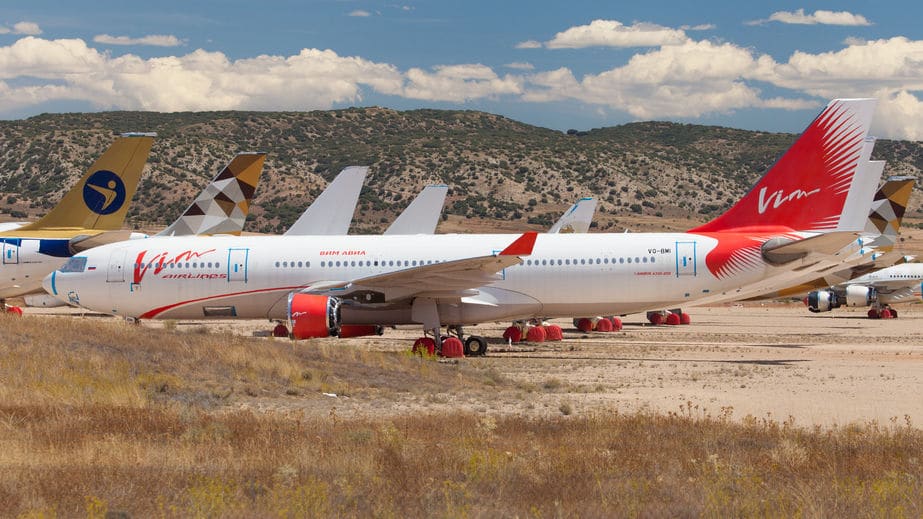 With fewer passengers flying this year, airlines have found themselves with a bit of an oversupply of aircraft - 16,000 too many aircraft to be exact. According to aviation industry researcher Cirium, back in April of last year, 62% of the world's aircraft were grounded. Too many airlines have state-of-the-art flying machines that have nowhere to go and all day to get there, and thus, need to be put into storage. But how do you store a multimillion-dollar piece of hardware, and what are the processes to eventually return it to service? Let us explore.

Stage 1: Choosing Where to Store the Aircraft

While deciding to take an airframe out of flight operations is easy, it is much harder to choose where to put it.

Most modern airports, located in dense urban areas, are not designed for long term storage nor do they even have the room to relocate more than a handful of grounded aircraft. Plus, as many airports are privately owned they can charge whatever they like to the airlines with grounded aircraft, with some charging up to $1000 per plane per day. Although many have offered space for free as they know this crisis will be relatively short-lived (such as Schiphol, who are not charging KLM any parking fees). If a major airport is ruled out, then airlines will need to find a regional airport to store the planes, that has enough room (or is willing to shut down an extra runway) and has the required support to maintain an aircraft long term.

The location of the airport is also important. While there are many suitable airports around the world, those airlines that operate in hot, cold, or humid countries might have to store their planes elsewhere to avoid the effects of poor weather (humidity can make short work of electronics). For example, Singapore Airlines has chosen to store the majority of its widebody fleet in the middle of the Australian outback in Alice Springs. The dry weather in the desert (it rarely rains) makes it perfect for keeping an aircraft electronics in top condition for as long as possible, and the lack of major storms like blizzards and hurricanes makes damage incredibly rare. Other airlines have followed suit, like Qantas, who have put their A380s into deep storage in the American desert.

‍“The A380s have to remain on the ground for at least three years until we see those international volumes brought back,”Alan Joyce, the Qantas CEO said.“The aircraft is being put into the Mojave Desert, where the environment protects the aircraft because we have the intention at the right time to restart them, but that is a considerable amount of time away.”

Simply parking the aircraft in the middle of a desert won't keep the plane safe for very long, and any type of park for longer than a day or two, could do irreversible damage if the plane is not prepared. When the aircraft is inducted to the storage, several different things happen:

“It’s quite a process to put the aircraft into storage, (but) once the storage induction check is complete, we’ll then start carrying out the periodic checks every week”

Engineers will go over each plane's vitals every week and will go as far as to spin up all the aircraft batteries and engines. This keeps not only the machinery humming but also ensures that the aircraft can fly at a moment's notice - a special feat considering some airlines like Qantas intend to have aircraft in storage for three years. Lastly, engineers will need to actually move the planes once a week to prevent the tires from compressing and changing shape under the heavy load.

To bring a plane back out from the cold is just as extensive if not more than the initial storage. For a larger plane like the Airbus A380 aircraft, a crew of at least five engineers working around the clock for 24 hours is required to get the aircraft out as quickly as possible. Once the plane is technically ready to fly, it is up to a team of 200 cleaners to move through the cabin (and the outside of the plane), scrubbing surfaces, replacing seat covers, and deep shampooing the carpet.

From enhanced maintenance to a complete refresh of our cabin interiors, discover what we're doing to get our aircraft ready to soar again. pic.twitter.com/P0YdO2q9yO

According to Boeing, there are several dangers that an airline needs to watch out for when returning an aircraft to service:

Because of airplane system inactivity and the lack of regular maintenance checks during parking, the following may also occur: component mechanisms may lose lubrication, batteries may discharge, contamination of potable water systems or fuel tanks may occur, and some systems or components (such as oxygen cylinders, tires, hydraulic systems, and landing gear shock struts) may lose pressure. Although the airplane is inactive during parking, it is important to maintain the engine, auxiliary power unit, and cargo fire extinguishing systems, and all portable fire extinguishers in fully serviceable condition in case of a fire. The airplane must be electrostatically grounded while it is parked. Once the aircraft is ready to go, pilots from the airline will fly to pick it up (via regional commercial travel) and then fly it back for commercial service.

While it is optimistic to discuss how aircraft are returning service, the truth is that the aviation industry has a long way to go until it fully recovers. Many airports across the globe are still flooded with grounded aircraft, and some countries still haven't opened their borders (Australia for example has extended its border closure to 2022). As such, many of these planes will remain on the ground for longer than expected, and if they are not stored correctly, it can have tragic results. Recently a Sriwijaya Air 737-500 crashed in Indonesia after nine months in storage.The aircraft had been approved to fly according to the Indonesian transport ministry and Directorate General of Civil Aviation (DGCA), both of which said that they “met the stipulated conditions for the extension of its aircraft operation certificate (AOC)". The plane underwent further checks before returning to operation service on December 22nd, 2020, following a special request by Boeing to check for corrosion of the engine valves. The report is not clear at this stage what the outcome of these additional checks was but we can only assume the plane passed with flying colors.While the investigation is ongoing, it is suspicious that a plane would fail so soon after a return to service. If a connection is proven, it will make many other airlines yet more careful, and reinforce the procedures and checks leading to bringing aircraft back into the fold.